All the Bachelor's Degree Courses, the Master's Degree Courses and the Single Cycles Degrees offered by Link Campus University are part of the Academic School.
The expression “undergraduate study” identifies the Courses of Studies which can be accessed upon completion of the secondary schools, whereas the expression "graduate study" identifies the Master's Degrees. 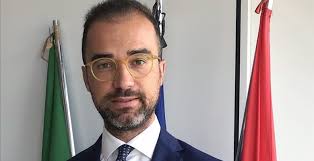 President of the School for the Graduate and Undergraduate activities
The President may delegate his duties for the following areas of expertise:
Head of teaching.  Relationships with businesses.

He was born in Taranto in 1980. In 2003 he graduated in Law at the University of Bari, where he also obtained a PhD.

He continued his academic training at the University of Molise, where he attained a research grant in commercial law.

He was appointed Advisor to the President of the Parliamentary Commission of Inquiry on the Banking and Financial System to the Senate of the Republic.

He was appointed Legal Advisor to the Minister of Justice, and Head of Technical Secretariat of the Vice President of the
The Supreme Judicial Council.